The framework defined by IEEE 1471 is shown in Figure 1 as a UML class diagram. 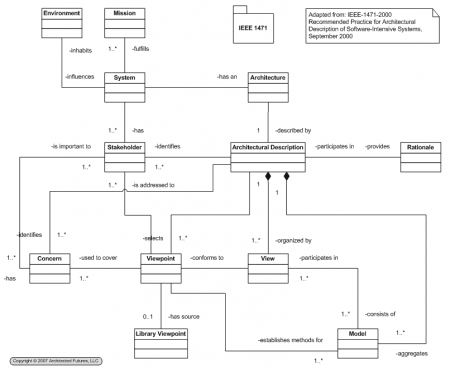 The focus of IEEE 1471 is the Architectural Description. Our focus is the architecture itself, as a mirror of the system. However, we need a vehicle for describing the architecture (as a means of describing the system) in order to be able to manage its evolution in the achievement of its mission, within a constantly changing environment. Thus, our incorporation of IEEE 1471 as an engineering specification.

The following narrative reads the IEEE framework generally from upper right to lower left. Bold, italicized words refer to the boxes in the diagram, which represent the significant entities in the model. The narrative largely describes the relationships being defined between the entities which gives the totality of the Architecture Description system its function. It states:

IEEE 1471 does not prescribe any particular view or viewpoint as mandatory. Nor does it prescribe specific models or modeling technologies.

The Zachman Framework described earlier can be mapped into the IEEE 1471 framework as a comprehensive set of 36 views where each view conforms to a viewpoint defined by an abstraction level and point of focus. The Enterprise Architecture Tool Suite supports this and other mappings as part of an architecture description.