In a 1987 IBM Systems Research Journal article John Zachman proposed a framework for rationalizing concepts and specifications in the development of information systems. He developed his framework while working for IBM and studying the operations and requirements of a great variety of IBM customers. The framework he documented in 1987 was extended and formalized in a 1989 IBM Systems Research Journal article which was co-authored by John F. Sowa. The Zachman Framework, as it has become known, is a widely used reference model used by enterprise architects to explain and measure various facets of enterprise architecture. We use an adapted form of the framework within the Enterprise Architecture Tool Suite as a comprehensive schema for the classification of architectural elements and as a measurement system for architectural evaluation and comparisons. 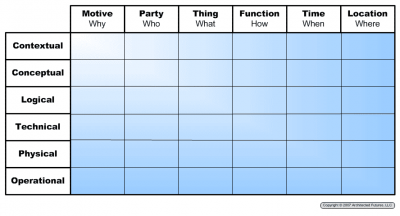 The grid in Figure 6 depicts the adapted Zachman Framework using Architected Futures’ naming conventions and column arrangement. Each axis of the framework is comprehensive in scope with regard to its dimension, and defines its dimension in terms of a series of easily comprehensible primitives. While the number of cells within the model is rather large to be fully comprehended as a unit, its organization is easy to understand and the dimensions are easy to understand. Using these two dimensions, a comprehensive set of simple, primitive models of an enterprise can be built, providing a rich information space with very clear separation of concerns between elements.

The layers of the schema, defined by the rows, describe different perspectives of the architecture with regard to the attention to detail and the breath of vision. The higher level perspectives are course-grained and broad focused. They tend to deal with abstract, general things. The lower perspectives are fine-grained and narrow focused and tend to deal with specific things. Correspondingly, the potential volume of material that might be developed is much larger at the lower levels than at the high levels. At the top, the schema provides a mechanism to encompass the whole of the enterprise and define its bounds and its relationship to its environment. At the bottom, the schema provides facilities to define every detail component part of the functioning enterprise. Between them is a layered scheme for decomposition translating from the view of the whole to a potentially microscopic examination of the parts.

At each level of the framework, the columns address the fundamental questions of who, what, where, when, how and why. Each column of the framework defines a focal point class of entities associated with the response to the question posed by that column. They define different areas of concern that, when taken together, tend to create a holistic definition of the rationale, activities and operation of the enterprise; the structure and behavior of the architecture. They again describe differing perspectives of the architecture; but rather than varying the degree of abstraction, they vary the focal point in terms of subject matter.

By using these two elements together, the grid provides a comprehensive schema for classifying architectural information with respect to an abstraction level (indicating a perspective or viewpoint) and an area of focus, or data type. The cells at the intersections of the columns and rows define a comprehensive framework of primitive elements and models describing all aspects of the enterprise in a methodical manner, from scope and concept to operation.

The architecture layers of the Zachman Framework define a hierarchy. However, neither the approach advocated by John Zachman nor the use of the Enterprise Architecture Tool Suite requires the development of the architecture artifacts to follow any specific path. Both “top-down” and “bottom-up” techniques can be supported. And both may be done simultaneously. Real world situations most often require this flexibility. The framework provides a coordinate space and mapping mechanism that allows tracking of architectural elements as they are developed, and a measurement system to gauge the type of coverage being made as islands of information are populated on a project by project basis. It also provides the basis for validation and reconciliation as the detail islands are merged and assembled into a larger picture.

ISO 42010: "A Model Kind defines the conventions for a type of Architecture Model."