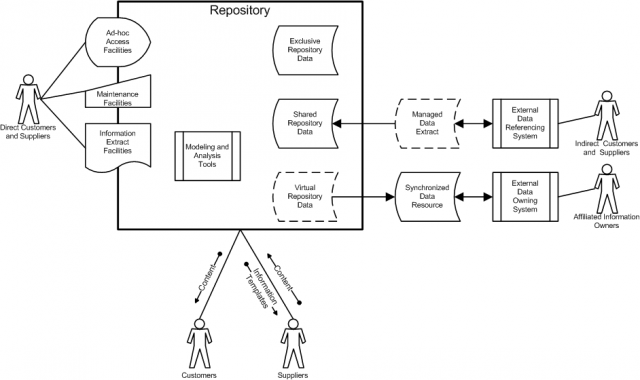 Prior to this point we have used a GUID of our own design as a universal identifier for all elements. This has the benefit of providing a fixed size element which provides some efficiency in automated operations. However, a problem with this approach is the complete obfuscation of all meaning connected to the internal GUID when it is viewed by a person. In that sense, there is a strong motivation to move toward the use of either a RDF namespace type notation. However, one aversion to the standard RDF type notation has always been the issue of language. Part of that issue has to do with choice of language (English, etc.) for words and the other part of that aversion has to do with the choice of words as selected to represent concepts. The use of GUIDs avoids these two issues and allows for translations to be employed for tailoring the representation of the GUID to a language and word choice that is most appropriate to the target audience.

(See font page, column 3, near the bottom, I think.) For everything. Soup, kitchen, nuts, bolts, aircraft, the Panet(?) Pluto, and every member of the community and their grandmothers. We find out about stuff that we care about, which is a critical feature, then we filter, and then we catalog it. We care about stuff, we catalog it. We don't care about stuff, we don't catalog it. But we don't assign GUIDs until we anticipate a need to deal with an element as a unity. [Most GUIDs are assigned and used internally and automatically by the system. EATS. We only tend to look at GUIDs to verify stuff if the system looks a little flaky, to debug it, or to validate historical accuracy. GUIDs are hard on your eyes. People don't use GUIDs unless they have to.Personal note. Looking back to the 1960's when I was at Cal Poly, there was a "revolt" about people being assigned numbers. I remember being handed an "IBM Card" to be able to register for classes. I can almost remember my number, 7 something I think. or, maybe that's my CDL. You had to write both numbers on your checks at the book store. Now I'm inventing schemes, yet again, to assign mumbers (GUIDs) to people. But, at least its only 1, it's completely unreadable, and it's the same as all of the other animals, plants, m inerals, vegatables, atomes, forces and conjectures in the universe, so maybe its not so bad.) Creating GUIDs early, is not a problem. When our current size specification becomes an issue, there are easy solutions because it was "designed to grow." There isn't supposed to be any issue, numbers are an infinite set. We can catalog whatever we want and keep track of it. Forever. Off and running.

We don't assign any GUIDs until we identify something. And then we assign a GUID if its something we didn't already know.  And we start to classify it. (If we've never seen you/it before, and never heard of you: "Oh, you're a new member" or "Oh, that's a new idea!", we give out new GUIDs. If we've heard about you before you arrive, there might already be a GUID waiting in your name1.) Community member GUIDs are no different from any other GUID. All GUIDs consist of a lot of mathematics gibberish that is used to try to assure that they are unique in the universe as we make them up, yes, the big, big, big universe2 So, every thing and every one has a unique identifier. But, at the same time, "they are all the same" so there is no way you can just look at one and tell what it's about, if it's a "who" or a "what" or a "where" or a "how" or a "when" or a "why." There is no pattern. It's just not there. Whether it's an object or an action. Whether its a noun or a verb. Just that it's something that we have identified, and it's in our model. Honest. So, like everything else, you get lost in the system. Big deal, you've got a tag. Don't worry about it. It's a whole lot less conspicuous that an "@facebook" or "@.gov" identifier. It helps you get free badges. (But you have to work for them. They need to be earned. Except for the one that says "member." That's free, or so they say.) [Warning normal people, weird or geek science ahead --> happens at these3-> [The reason for the extra stuff above is because this works both ways. Not the security, the tagging. That same tagging that "gets things lost" is the mechanism for putting them back together, for "un-losing" them." Multiplexing and demultiplexing. [And "weaving", aka creating new patterns, aka intelligence [ [{Bug Report:4} Intelligent Un-losing + pattern matching + recognition would be the next frontier[]Anyone there yet? That sounds like security in the movies, how the cops track and spot the guy instantly by knowing his patterns and doing facial recognition on the monitor as he goes through the subway. So a frontier must be further out.]] EATS at its current design level is about pattern matched multiplexing as an Augmented Intelligence Toolkit. This is core to how it's done.[Core Architecture Concept]] That other stuff in there, those were maybes. This is how I do "architecture." It's how I also bias my algorithms. By asking, what would my next moves be? How else could we help the whole of what we're doing? Lot's of simple compare contrasts that would be done faster, and be more accurate, and inclusive, if they were done by somebody or something else if it mattered and I wanted it done to a measureable standard. [Horizontal Search for inclusion] A computer is fully capable of searching a lot more stuff than I am, a lot faster. And I could just decide from that right/wrong, good, better, best, yes/no, "around 5," or "probably okay, but it would be advisable to monitor the situation. Pease let me know if it gets ourside these parameters."  That's called "Augmented Intelligence" if its adone as a cooperative exercise between a human and a machine, at least in my parlance, and that's what EATS is about. Put that on your iPhone and tell Siri to take a vacation. But first you'd have to down load Ani to do the job., or leave Siri there as an assistanct for Ani, a lot of peole would probably like that option. You talk to Siri, Siri will talk to Ani, and Ani will talk to Ani will talk to Ani until she figures it out, or tells you "I don't Know, but here's some possibilities."]

ISO 42010: "A view is comprised of Architecture Models. Each model is constructed in accordance with the conventions established by its Model Kind, typically defined as part of its governing viewpoint. Models provide a means for sharing details between views and for the use of multiple notations within a view."