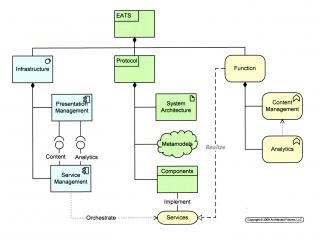 Thanks for Dropping By

Hi! My name is Joe Van Steen. I'm a "retired" systems architect, a computer programmer, a modeler, and a futurist. Previously, this website served as my personal blog and notebook. Most of the web content was flagged as "internal" or "restricted;" and the majority of what is now on the web wasn't on the website, but was in various documents on my desktop computer. Now, as of January 1, 2017, I wanted to "open the content" of the website to enable peer review, and to enable collaboration and further review on future development efforts.

The website content is focused around the architecture and implementation of some software I have been developing, which I call EATS. EATS is a modeling tool. The website is fundamentally a prototype web client interaction component for EATS. That means that everything you are reading and seeing should be coming from EATS. Today that isn't true. What you are seeing is coming from a Drupal database. I have had a series of these "web experiments" since I started Architected Futures in 2005. This one uses Drupal, a very small amount of my own PHP code, and a variety of generic Drupal "plug-in" modules. It serves as an operational, functional model of a capability set that I want to program into EATS, in Java and metadata models. EATS is built on Eclipse, using Java. (Test new version of the Architectured Futures web facility.)

Project Athena is the public launch project for Architected Futures.The project is currently in its formation stage. A project charter is in development and targeted for completion toward the end of 1st quarter 2017.

I totally like what Steve Ballmer has done in creating USAFacts.org. It is the perfect civics book for the internet age.The average intelligence demonstrated by a lot of native Americans indicates that either a whole lot of them were never taught Civics, or they didn't pay much attention in school. Naturalized citizens have to take tests on government before they can be given citizenship, but native Americans appear to not really know how their country works. 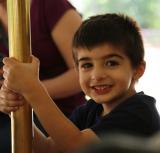 For Mason - "You are a fun guy to watch grow up, and I wanted to pass along a few insights, ideas, and opinions." - from GPA

This is the first, in what I hope will be a series of posts, helping (some) new comers to understand Architected Futures, that takes a particular track, along a particular train of thought and story line. From a functional specification basis, it's a form of Use Case. It also defines some persona specification. These are things that are meaningful, and very, very important to software geeks. Like me. But Use Case stories also need to be important to users. It's their Use Case. What I try to do, as I envision and architect (design) systems, is to put myself in the position of the "User" of the system, and I ask, what would I want it to work like, be like, look like, feel like, etc if I were the one doing, living in, dealing with ... whatever. You get the point. There is a balance to that. And a lot of times it isn't appreciated. And, its tough to maintain, but it's easier with practice, like riding a bicycle. I have my own viewpoints as a "User" too, because it's a shared environment.

The purpose of this blog post is to announce a shift in strategy in the development of materials relative to EATS and Architected Futures. EATS has, of late, been developed to be an open source, open architecture software development effort. However, the totality of what I have wanted to do with Architected Futures has not been approached as fully public material. I now think that, while that may, or may not, have been appropriate when I started this web site, it is not sufficient going forward.

This blog entry is a re-post of a posting that I made in the LinkedIn Systems Thinking World discussion group under the Systems Thinking and Enterprise Architecture topic. The context of the dialog was an ongoing discussion concerning the relationship between Enterprise Architecture (EA) and Systems Thinking (ST). Whether EA was a process that dealt with 'hard' or 'soft' systems, and whether such activities were essentially the subject of a 'functional' systems approach. A related blog entry by David Alman describing what is meant by a 'functional' systems approach can be found at systems-thinking-approaches.blogspot.com.au. [Note. David passed away from a battle with cancer on the 18th of July, 2014. If the links fail after a time, that is probably the reason.]

As an inaugural post for this public website I thought I'd start with some historical context. Where did some of the ideas for this site come from? What is the origin for the Element Architecture Tool Suite (EATS)?

Since I was very young, I've always been interested in the future. What does it hold? What will it look like? How will it come about? In the 1950's, as a young child, I was a  big fan of Willy Ley and his books depicting rockets and space stations. The idea of space travel and exploring the planets and stars fascinated me. As I grew older Isaac Asimov and Arthur C. Clark became favorite authors. The technology was interesting and exotic. And there was adventure in exploring new worlds, new ways of living, and an aspect of a new era of "Manifest Destiny" — except this time the expansion was outward to the solar system and beyond. But the other part that intrigues me was the planning, the design, the engineering. Given the vision, how did you go about making it happen? What would be involved in making it work? How do you get there from here?

END_OF_DOCUMENT_TOKEN_TO_BE_REPLACED

ISO 42010: "A view is comprised of Architecture Models. Each model is constructed in accordance with the conventions established by its Model Kind, typically defined as part of its governing viewpoint. Models provide a means for sharing details between views and for the use of multiple notations within a view."